Golf beginners not only have to learn a range of complex techniques and kinds of golf wedges but also a lot of slang and terms. And ‘up and down’ is one among those confusing catchphrases.

What does up and down mean in golf? The term ‘up and down’ involves hitting the ball up onto the green (a chip or bunker shot) and down into the hole. You call it an up and down only when it takes a total of two strokes.

An up and down can occur almost anywhere. And it has a vital role to play in a good performance. We’ll offer you a detailed answer to the topical question.

What Does Up And Down Mean In Golf?

As we just discussed, to get an up and down in golf, you need to make the ball go into the hole within two strokes from where the ball is standing on the green. In a word, an up and down is a two-shot sequence leading to a putt.

What Are The Rules?

In particular, the up part refers to getting the golf ball from off the green to onto the green. Literally, the ball should be near the green while we hit the shot as a chip or pitch.

However, indeed, players can strike an up shot anywhere on the golf course.

Meanwhile, the down part refers to heading the ball into the hole with one hit. Many golfers call it an up and down when they strike the second shot with a putt but from outside of the putting surface.

In fact, the down shot should go from on the green, not from outside of this area of the flagstick and hole.

One thing to note is that you can claim an up and down for any score on the hole, be it par, birdie, eagle, or bogey.

If you’re around the green and drive the ball up onto the green then down into the hole within two strokes, you've claimed an up and down. It doesn’t matter what the score is.

In other words, players can get up and down without ‘saving par.’ There’s no rule on particular scores that an up and down makes.

You have to start an up and down from around the green. There is no specific definition of the term ‘around the green’; however, it practically indicates any area within 30 yards of the hole.

So when your ball is not on the green and rests on anywhere less than 30 yards from the hole, and you put it into the hole with two strikes, you’ve achieved an up and down.

There are two common types of up and down, namely ‘scrambling’ and ‘sand save.’ While scrambling requires players to score par or better, sand saves usually come with no specific requirement.

Still, sometimes, there may be a requirement for a sand save, such as the up shot has to start from a bunker.

How Players Use The Term? 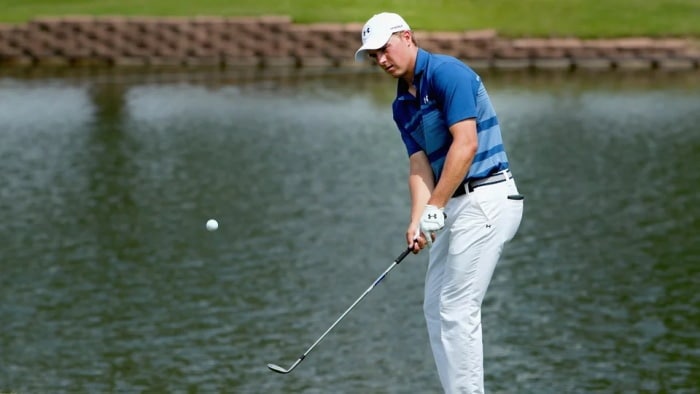 Understanding how to use the golf term up and down is a cool way to show off your professional golf knowledge.

A fellow opponent may offer a compliment, “Nice up and down!”

Announcers on TV golf broadcasts often say, “She got an up and down for the last hole,” or “This up and down will help him save the par.”

So, if you see a competitor hit his first putt on the green, you can simply say, “Cool! Nice up and down.”

Depending on the shot’s difficulty level, you can use the term more contextually. If a player drives the ball out of a deep bunker successfully and makes a putt, you will say, “How great is that up and down from there.”

This expression implies how difficult the up and down are.

Another way to say this phrase is, “Up and down and there you get a birdie.” In this case, you’re referring to the upcoming shot, like a friend is approaching his next hit on a par four.

He will earn a birdie score on the hole if he successfully claims an up and down. 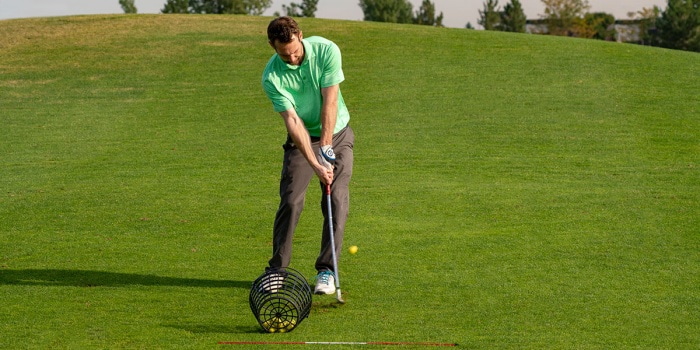 Here we have a few practical examples for you to look at so that you can understand thoroughly how an up and down occurs:

After missing the green at a par 3 hole, a player hits up and fails to make a putt. We consider it an unsuccessful up and down.

A player is taking up the par-3-hole and misses the green at his first shot, and the golf ball goes to the rest yard outside the green. He then hit up onto the green and down into the hole to score 3. This shot is not only an up and down but also a successful scrambling.

The player moves on to a par 4 hole. After giving out four unsatisfactory shots, he’s still off the green and 15 yards away. He chips up onto the green and manages to make a putt. We call it an up and down but not a scramble since the player didn’t save the bar.

The next challenge is a par 5. Five shots are easy to get to a bunker. He manages to play a nice bunker and sink his putt. Eventually, it’s accomplished sand save and up and down. We don’t consider it a scramble since his score is 7, not 5.

Meanwhile, after 3 shots at the par 5, his teammate is 145 yards away from the green. He then performs an excellent shot to nearly 12 feet from the hole and makes a putt. We consider it a nice scramble but an unsuccessful up and down because his shot is not from around the green, which should be within 30 yards of the hole.

At a par 4, a player takes the tee shot behind a tall tree and has to chip sideways, which, according to the regulation, leads to a missed green. He then hits the next shot onto the green and achieves a putt. We can claim it is a scramble, but not a successful up and down because it is an approach shot and doesn’t start from around the green.

The beauty of the golf term up and down is that it considers if a player has the ability to drive the ball into the hole with two strokes from around the green or not.

However, this term is a binary statistic. It only measures if an up and down is successful or not based on certain criteria without capturing nuances.

Plus, there has not been an approved definition of the term ‘up and down.’ That’s the reason seeing the difference among players’ up and down percentages is very difficult.

Why Is Up and Down Important In Golf? 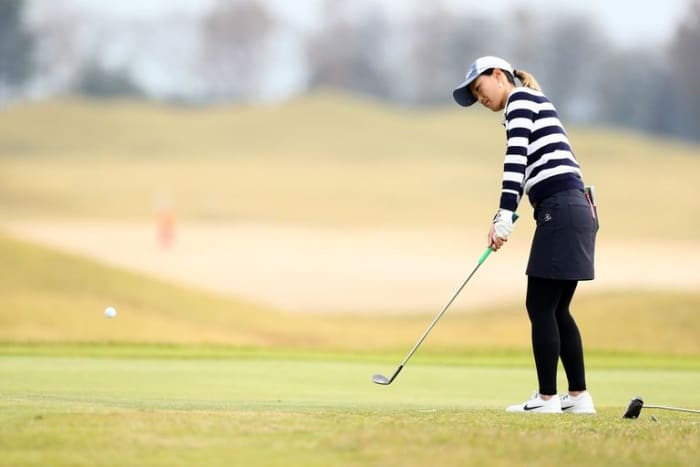 In golf, the closer you get to the hole, the greater the chance to recover from a bad shot. So it’s important to evaluate a player’s ability to hit shorter shots.

In particular, if you hit a bad short drive, there are opportunities afterward for you to recover the hole. Similarly, should you hit a poor long shot, you'll have some chances to make up for it, be it a nice chip or putt.

But a bad short game affects your score more badly than a long one because you have fewer opportunities to make up for it. After hitting an unpleasant chip, you have only one more turn to make amends at the next putt.

Once you make a failed putt, your opportunities to recover reduce dramatically to the lowest.

The ‘up and down’ term includes both shortest shots in golf - putts, and chips. Thus, there’s no wonder how critical this measure is to consider a good short game. The better you are at up and down, the more scores you’ll save.

An up and down in a game is a good thing as it proves the player can take a small number of strokes to complete a hole.  Experienced golfers who have just missed a shot know that they need to make up-and-downs to improve their scores.

How To Improve Your Up and Down? 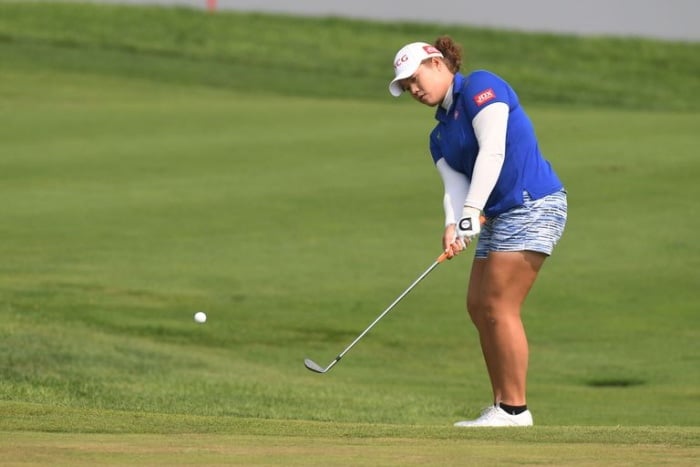 You can keep some essential tips in mind to enhance the rate of success on an up and down opportunity.

To begin with, YouTube is an effective means of training your up-and-down skill. It’s a place where you can find an abundance of golf instructional videos on the ‘up and down’ term and other topics as well.

We suggest watching "How to putt from off the green" or video below. There are so many other useful videos relating to up and down. You should take more advantage of this amazing platform.

Before getting into learning up and down, most beginners would expect it to be easy. And they end up feeling frustrated as they’re closer to the green since the expectation doesn’t match the reality.

Therefore, players need to engage in this self-training process to advance their up and down techniques:

This step involves knowing your ability and setting out short-term and long-term goals to improve it.

For example, newbies should draw up a strategy to keep their chips as straightforward as possible and set a self-punishment for error.

It’s advisable to have one favorite shot around the green that players can show off various clubs and keep their swing as short as possible.

The final step of practicing up and down is to record how you make headway each time.

In particular, you can keep track of how frequently you make a chip shot, the times you hit the final target and your landing, and the times you get up-and-downs.

This way, you’ll see how significantly you’ve improved and been able to increase the number of up-and-downs in a game.

For those who are new to golf, many terms and catchphrases, including ‘up and down,’ appear like a foreign language.

We hope our answer to the question, ‘what does up and down mean in golf,’ provides you with the clearest explanation. Indeed, this tiny term is a big part of your game.

A golf player has to be good at up-and-down to save scores. Performing a lot of up-and-downs means you’re rescuing yourself from failure. For this reason, golfers should keep training and practicing regularly to level up their ability.